I was really chuffed when I was approached about a guest post by Pete Johnson to celebrate the publication of The Vampire Hunters, sequel to The Vampire Blog which I had loved, and reviewed here.
So I am really pleased to introduce this guest post from Pete, written exclusively for Library Mice:

John Cleese was once asked where he got his ideas from.

His reply. ‘Oh, there’s a marvellous warehouse I go to called, ‘Ideas r us.’
If only.


Gaining that initial spark of inspiration is one of the most elusive and frustrating parts of a writer’s life. Frustrating, because ideas cannot be summoned on demand and rarely come formed.


No, they have to be wooed and given time to emerge.
And they can pop up in the most unlikely places. Like a school sports day.
There I was at my nephew’s school Sports Day and noticing how many dads had turned up, including one who was coaching his son in the egg and spoon race. He was telling his son how to start and the best way to run and his final words of advice were. ‘And remember, coming second is nowhere.’


A terrible thing to say, of course.
But that one little comment sparked off something in me. I stored it away. I returned to it. I started noticing other examples how pressurised parents and children are today. And I ended up writing the first ever novel about hyper-parenting: ‘How To Train Your Parents,’ which has now been translated into twenty-two different languages.


But, if I hadn’t heard that one piece of conversation would I still have got the idea for ‘How To Train Your Parents?’ That, as they say, is a good question. And such is the mystery at the heart of every writer’s life.
My latest book: ‘The Vampire Hunters’ came about because of a grim night at the cinema.


I’d gone with some friends to see a horror film. And it was loaded with one eye-popping piece of gore after another. And soon I was so bored with it until I noticed a fascinating phenomenon: after about half an hour into this unrelenting grisliness the audience began to laugh. Nothing on the screen was the least bit amusing, but they were still bubbling away with mirth. Many carried on roaring with laughter for the rest of the film, illustrating Alan Ayckbourn’s theory that: ‘One of the most endearing features of the human race is that we can’t be serious for long.’


And it seems to me too, that the best spooky tales have to stir up both our delight in dread and our need for a good laugh. Without light how can we create shadow.


That’s what I’ve tried to do in ‘The Vampire Blog’ and its sequel, ‘The Vampire Hunters.’ (which as my publisher’s would urge me to point out, can be read as a stand alone book) My central character is Marcus – a boy who, as he turns thirteen has to face not only all the usual teen problems but a whole new one as well


His parents are half-vampires and he’s about to start changing into one too. In ‘The Vampire Blog’ we see Marcus have a blood craving at school and get poisoned by a pizza (it had garlic in it) He also gets attacked by a vampire – oh yes, they exist too. And his life is saved by the other main character in the story: Tallulah.


In ‘The Vampire Hunters,’ we see Marcus facing Phase Two of his change-over into a half-vampire. At some point in the next few weeks he will have two attacks of blood fever. That’s why he must take a little bottle of blood, (cunningly disguised in a cough medicine bottle) to school with him every day. ‘It’s perfectly natural,’ says his dad.
‘Perfectly natural,’ replies Marcus. ‘Excuse me, but who else in my class, in my year, in my school, will be taking a bottle of blood with them today?’


And that’s what I enjoy about ‘The Vampire Hunters.’It’s a teenage boy, disagreeing with his parents: something which happens in many, many homes – only Marcus’s argument happens to be about taking a bottle of blood to school.


In this book we see how much Marcus hates it, when, as he puts it, ‘things happen to me which I can’t control or stop. It makes it seem that I’m turning into someone who’s not me.’


Again, many of us have moments like that in our teens, but in ‘The Vampire Hunters,’ I can mythologize those feelings. And events too.
So I can recall, with a shudder, a terrible date at the cinema. I drew directly on this when I was describing a similar scene in ‘The Vampire Hunters,’ only with a vampire twist as well.
And writing about that time I wasn’t just reliving it but sort of reinventing it as well.


‘Give a man a mask,’ goes the old saying ‘and he will tell you everything.’ Well, some of the scenes in ‘The Vampire Hunters,’ mean more to me and move me more than anything else I’ve written. Notably the big decision Marcus makes about Tallulah at the end of the book.


Oddly enough the best moments in writing are often when you don’t seem to be doing anything at all. It’s almost as if the scenes are given to you. The characters are talking away and you’re just transcribing everything they say.

This happened to me in the scenes between Marcus and Tallulah. Their deepening relationship is another key theme of ‘The Vampire Hunters.’ I love their edgy, argumentative scenes. And when the words are flying between them, sometimes I can hardly keep up.

I always thought it was a bit of an affectation when writers wrote they didn’t know what was going to happen next. And I certainly plan my books quite carefully. But I often didn’t know what Marcus and Tallulah were going to say to each other next. I was an eavesdropper more than a writer!


Just as I don’t know what you, the readers, are going to make of ‘The Vampire Hunters.’ And so, right now I feel a bit like a concerned parent watching their child leaving the safety of home and setting off to their first day at school.
But no book becomes truly alive, until someone else reads it. That’s the most magical part of all.


And a vital aid in helping readers find books – old and new – is Library Mice, a website to which I return regularly. That’s why it’s a special pleasure to write this blog for you now – and nervously await your verdict.

Thank you very much to Pete for taking the time to write this great guest post. I feel really chuffed that Library Mice got such a nice mention!
Tune in tomorrow for my review of The Vampire Hunters, and a chance to win a set of the books! 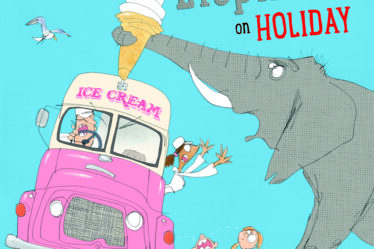