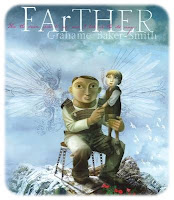 This little boy’s dad dreamt of flying. A dream that took over his life, curbing how much time he spent with his son. Sometimes, his dream made him depressed, sometimes it made him elated. When the father is called to war and does not return, the dream of flying seems to die with him. But one day, years later, the dream talks to the son and he decides to make his father’s dream come true. 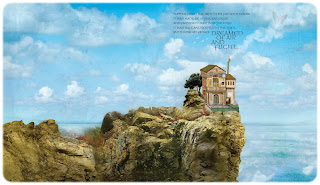 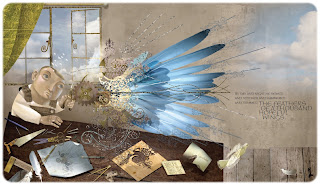 The style of illustration in this book, a mix of artwork, photographs in a collage come together to create a most unusual picture book which explores the relationship between father and son in a particularly poetic and elegant way. The artwork is beautifully executed and although it might not seem traditional and particularly child-friendly to start with, I certainly felt myself warming to the pictures very quickly and what was at first weariness turned quickly into fascination. I think readers will benefit from going back to the illustrations over and over. They will find themselves noticing little details which had escaped them before, such as how wing patterns and drawing of birds are found throughout the book. This amount of detail brings extra depth to an already multi-layered story. The illustrations here rather than mirror the text, compliment it by showing things that the text cannot express.  The artwork conveys a message of love, loss and following one’s dream, however unattainable they might seem, beautifully.
There is a lot of symbolism in the illustrations – the use of poppies throughout, the rays of light both represent, I think, underlying themes in the book. Obviously war plays a vital part in the story and the poppies’ presence is indeed very symbolic, a premonition of the father’s ultimate demise. The use of rays of light is more puzzling in a way. There are a few scenes within FArTHER that have a clear spiritual feel; the characters are basked in what looks like a Divine light, and you can nearly feel the heat radiating from the page. It is so unbelievably effective.

I think this is what makes this book so utterly intriguing and fascinating. It is open to so many interpretations, and is a beautiful,, lyrical book which will make you think and ponder about loss, hope and the deep meaning of love parents hold for their offspring. A very powerful read.