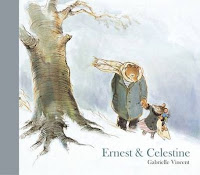 When Ernest and Celestine go for a walk in the snow, Simeon, Celestine’s stuffed penguin accompanies them. But when he is left behind, Celestine is heartbroken and blames Ernest. He is desperate to make amends but there are no toy penguins anywhere in town, and Celestine cannot be convinced to adopt a new friend. But then Ernest gets a marvellous idea, which will ensure a happy ending for everyone.

Originally written in 1983, Ernest & Celestine is only one of a series of seventeen pictures written and illustrated by Belgian born artist Gabrielle Vincent. It is the first time since the 1980s that a book from the series has been available in the UK, and what a treat it is. 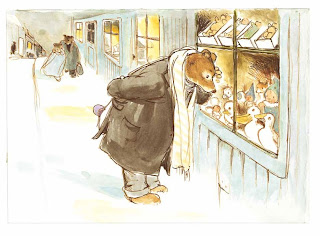 It is the simplicity of the tale and the beauty of illustrations that make Ernest & Celestine so charming and poetic. Vincent’s stunning watercolours give a wonderful old-fashioned atmosphere to the book. The style of the artwork, but also the scenes it depicts, are timeless. Some scenes are reminiscent of some of Beatrix Potter’s work, but this is definitely not set in the same period. The period Ernest & Celestine is set in is indefinite, but the illustrations certainly portray a simpler and more carefree way of life. Ernest and Celestine do not own much, but this is never seen as an issue and does not impact their happiness. 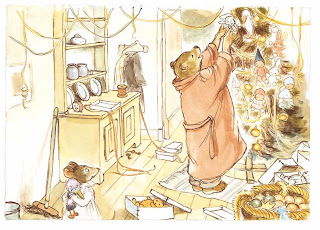 The central point of the  series Ernest & Celestine is a the unusual friendship between the two main characters. Ernest is obviously not Celestine’s father but loves her like his own; it really is a poignant relationship. In this particular book, many parents and young readers will be able to relate to the lost teddy episode and the sense of loss and mourning that ensues. This can be a dramatic time in a young child’s life and this is well depicted here. Celestine’s anger towards Ernest, despite his obvious lack of responsibility, is one reaction that will be familiar to both parents and children.

Despite being given many replacements for her lost Simeon, Celestine much prefers the one Ernest has sewn especially for her. Meanwhile, all of her unwanted new stuffed toys get shared between her friends during a big party that Ernest throws for everyone. As the story takes place at Christmas time, the overall message of kindness, generosity and sharing is one that is particularly welcome, when so much is focused on consumerism.

Ernest & Celestine is a beautiful, classic picture book full of tenderness, love and kindness. A lovely, lovely read for this time of year, full of warm feeling without ever descending into sentimentality.

A film is released in December in France and most of Europe, and will hopefully make its way to the UK in 2013: