The Double Life of Cassiel Roadnight 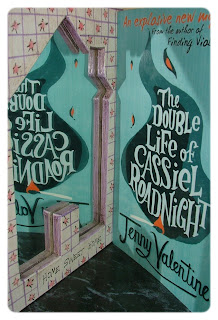 Sixteen year-old Chap has been in trouble for fighting (again) in the shelter he has been staying in when the strangest thing happens: the social workers show him a missing person’s poster with his photograph on it. Except, it is not him. The boy is called Cassiel Roadnight, and he has been missing from his home in Hay on Wye for nearly two years. The social workers are convinced they are the same person, and Chap, eventually, lets them. Because Chap is no one, with no family to speak of, and it seems so easy to slip in Cassiel’s skin and take on his identity, his family, his home, and become someone, at last. He is collected from the shelter by Cassiel’s sister Edie and taken back to the cottage to meet his mother, barely coherent under the influence of tranquilisers, and older brother Frank. Chap is worried that the family will see straight through him and work out he is an impostor, but he soon realises that he has bigger worries. Because Frank has a dark secret, and Cassiel’s disappearance is everything to do with it.

I am a big fan of Jenny Valentine’s work. Her writing is intelligent, and yet it is very accessible. She is one author that I am constantly recommending in the library. Her plots are always unbelievably original, with jaw-dropping twists towards the end and her writing is such that you feel compelled to read on. This one does not disappoint, I can tell you. Unfortunately, it is hard to tell you anything else because I don’t want to give anything away! What I can say however is that this is a great thriller, well-paced, that will keep you on the edge of your seat. There are two main components to the thriller, two mysteries to solve: for Chap, the mystery is to find out what has really happened to Cassiel. For us, the readers, the mystery is also to find out who Chap really comes from. Both mysteries, unbeknown to Chap, are intertwined, and the ending does not disappoint on both accounts! But it is not before we follow Chap as he struggles to decipher the truth from one lie after another, both in his past and in the present. The book also explores some interesting themes; homelessness and teenage runaways first, but also the meaning of family: is this a concept linked only to nature, or nurture? Can only blood relatives be considered family? How influential is family in becoming who we are? There is also a running theme of loyalty, again intertwined with family. Chap is a great, loveable character who you feel a lot of empathy for; Valentine writes in such a way that you can feel his inner-struggle, his demons and his feelings towards his “new” family acutely. Through his eyes we are witness to a family in disarray, and the portrayal of the mother is at times poignant, verging on the heartbreaking. I like the fact that her books always include characters that are on the fringe, whether it is of society, or of social circles (Floyd here seems unbothered by not being part of Cassiel’s social group). Jenny Valentine obviously feels strongly about remaining individualistic and this, amongst other things is what gives her books a very unusual quality. I very much recommend you try this latest offering.