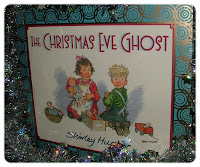 Bronwen and Dylan have just moved to Liverpool from the Welsh countryside. Their father has died in a mining accident and their mother has uprooted them to the city so she can find work to support the family. She takes on laundry to wash soon after and often has to leave the children home-alone while she pushes her old pram full of freshly-laundered washing to deliver in the nicer parts of Liverpool. The children are under strict instructions not to leave the house or answer the door when Mam is away on her errands but on Christmas Eve, the children hear a plonk, plonk, plonk … then another one, and another. Could it be Father Christmas on an early visit or more worringly, could there be a ghost in the house? Terrified, the children run out of the house …. 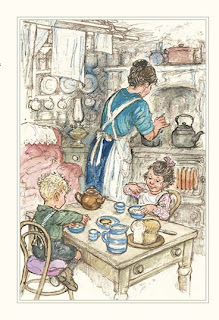 I don’t think it is possible to dislike Shirley Hughes’ work; she is a National Treasure and one of the Masters of British children’s illustration, with probably one of the most easily recognisable pen stroke. Hughes is gifted with the most evocative style, and this book is absolutely stunning and shows her at her best, conveying the most striking sense of time and place. Hughes herself said that she always wanted to make a picture book which would show the Liverpool of her childhood, in the 1930s. Here she draws from her memories to let us sneak a look at times long gone by: the difficulty of adjusting to city life, the hardship of poverty and manual labour, the social divide between rich and poor, between Catholics and Protestants, but also the kindness and support of a tight-knit community, the love and selflessness of a mother for her children. It is strikingly beautiful and poignant and yet at the same time a little playful, with the story of the “ghost”. I was in awe of how powerful this book was. We know Hughes’ work mainly through the Alfie books but she has turned out to be quite the Historian, with this book and other such The Lion and the Unicorn and Ella’s Big Chance. Her work is also utterly and unequivocally British.


The text is quite substantial so this is one story that can last over several bedtime sessions. The quality of the illustrations and the bewilderment that will ensue the discovery of all the details from the olden days will delight younger children. However, it is also very much suited for confident readers as well.


Apart from being an outstanding social history book which would be a great tool in the classroom, this also has a lovely Christmas message about goodwill and acceptance, about not judging people and giving them a chance, regardless of how different they might be from you (bigotry and prejudice between Protestants and Catholics are the main focus here) and recognising human kindness wherever it might come from.