The Brilliant World of Tom Gates

Tom Gates is quite a regular boy, but also a master homework escapologist and excels at tormenting his older sister Delia. He also spends a lot of time thinking about his band Dog Zombies and eating caramel wafers. But Tom still manages to spend a lot of time writing and doodling in his homework book and it is through his diary that he offers us a peek in his rather hilarious and eventful life. 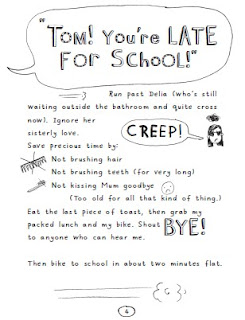 The diary format, especially when aimed at young people, very much lends itself to comedy; think Adrian Mole and Georgia Nicholson to name a few. But of course it would be hard not to draw similarities with the Diary of a Wimpy Kid  series as far as Tom Gates is concerned. But The Brilliant World of Tom Gates is a little more than that, and although it will undoubtedly attract Wimpy Kid fans, it will also bring new readers to this genre. What I loved about the book is  that the illustrations are integral part of the text rather than alongside it, and this brings a very unique dynamic to the page layout. Yet, the pages are clear and uncrowded, despite the huge amount of doodling (it would be interesting to know how long it takes Pichon to do one page). It also breaks up the page well for those young readers who feel daunted by large chunks of text. But I don’t want to label the The Brilliant World of Tom Gates as a read for “reluctant readers” because there is a danger that people will only see it as that, which would be both unfair and inaccurate. 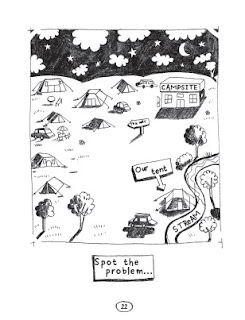 Tom is normal schoolboy, with family dynamics that are fairly normal (he loathes his parents most of the time and takes sadistic pleasure in taunting his sister, who is quick at returning the favour) and a school life which is fairly unextraordinary. But this is exactly what makes it such a success. The comical awkward situations Tom finds himself in are just regular every day stuff that happens to all of us, including the doomed camping trip at the beginning of the book (we have all been on one of those). It is the way the story is narrated and presented that makes it all so funny. And you will giggle, because Pichon really has the knack to make her readers laugh. No wonder she won the Roald Dahl Funny Prize this year. There is nonetheless a hint of more serious stuff within the story: not being the most popular kid, the rivalry between Tom’s dad and his insufferable brother. But it doesn’t dampens the book’s overall cheerful atmosphere.

The Brilliant World of Tom Gates is a fun, entertaining read. With its dynamic artwork and snappy storyline, it is sure to be a hit with young readers

Many thanks to Scholastic for providing a review copy of “The  Brilliant World of Tom Gates”.