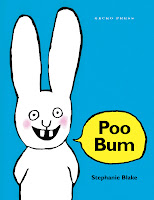 There was once a little rabbit who could only say one thing: Poo Bum. Day and night, this is his answer to everything. But his ill-mannered attitude might just be the thing that will save him on the fateful day he comes across a wolf who gobbles him up.

With its simple narrative, its fantastically bold and bright artwork and its rather memorable catchphrase, Poo Bum is sure to become a favourite with young readers. The joke just does not get old  after repeated readings (trust me, I have tested this by reading it many times to my own offspring). 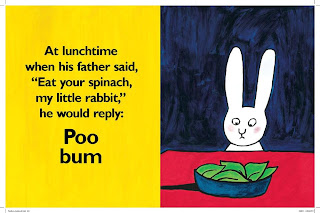 Beyond the naughty words and behaviour of the little rabbit though, lies a tale of a child trying to assert his independence, and in doing so pushing the boundaries, for which he eventually suffers the consequences. Young audiences will enjoy the reference to Perrault’s Little Red Riding Hood, and here the wolf represents the punishment, but as little readers find out, the rabbit hardly learns his lesson.  However it is fair to say that young audiences will probably not see past the fun of watching the little rabbit’s antics. But that’s ok; shrieks of laughter and the feeling of being given a licence to say something a bit rude equal a positive, happy experience of books and reading, and that is more than enough in my book.

Poo Bum is a fantastic book, and Stephanie Blake an illustrator with an unusual style, who is well worth discovering, and I hope parents will not be put off by the worry that their offspring might become  foul-mouthed. It is a huge giggle for the whole family! 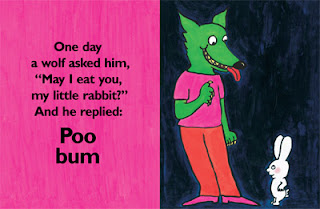 I don’t usually comment on translation, or the original text, because although I am bilingual, I am certainly not a translator. But I just wanted to say a bit about the original title and phrase, Caca Boudin. Though the translation of the term Caca Boudin is spot on (though if you were to translate literally, it would be “poo sausage”), it is hard to put across the importance of this phrase in the French language, because there is just no English equivalent. It is French children’s “official” swear sword, a slightly-naughty-but-nonetheless-allowed phrase that most (if not all) children say when they want to express dislike. So Poo Bum is definitely not just about scatological  humour and most definitely about the rabbit expressing his discontent about everything!