I first met Clara back in 2009 when I took the mouslings to an event at Bath Kids Lit Fest (see here). I remember it all very well: Clara’s friendliness and how approachable and kind she was (she drew a mouse for my son on a little bit of paper, and he still has it sitting on his bookshelf), admiring her fantastic teacup ring, and the amazing collection of buttons, ribbons and other bits and bobs (including wooden Scrabble pieces) she had brought for the craft.  We still have our little boxes full of treasure! I am so happy to welcome Clara to Library Mice, for a Fabulous Five on one of my favourite subjects: books for the very young!

Clara Vulliamy was born in London, the daughter of author and illustrator Shirley Hughes and her husband, John Vulliamy. She studied at Chelsea School of Art, The Ruskin and the Royal Academy. Clara started concentrating on writing and illustrating children’s books when she had children of her own and has now written and illustrated many stories for children and babies. She has written and illustrated  many successful series of picture books, including Lucky Wish Mouse, The Bear with Sticky Paws, and Muffin (see my review of Muffin: the Birthday Surprise here), all published by Orchard Books. The first story in her latest series, Martha and the Bunny Brothers, will be published in March by HarperCollins Children’s Books. She lives in Twickenham, with her husband and their children.

You can visit her fabulous blog here.

Everything about sharing picture books with the tiniest tiny tots is just so RIGHT… you are starting them off on a life-long love affair with reading, and opening up a window into the extraordinary world of the imagination. You are training their eye, their ear, their powers of concentration.
And perhaps best of all you are giving them your loving attention. When I hear someone saying ‘my toddler LOVES this book!’ I sometimes think to myself, ‘that’s because they love YOU! And the cheery way you did all the silly voices and pointing out all the little details, and that you were prepared to put aside those vital emails, that pile of laundry, to read it OVER AND OVER AGAIN…’ It’s heroic work! 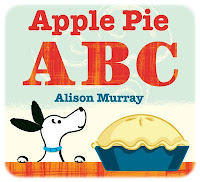 If anyone thought a book for toddlers has to be crassly garish, they would think again with this one. It’s superbly well designed. The limited palette is very classy, printed on lovely matt paper (sorry, what a nerdy illustrator’s thing to say!), and it has a bold graphic slightly retro look.

But that would be neither here nor there if it wasn’t a cracking good read. With very few words, laid out in alphabet form, a dear little dog longs for some apple pie, and goes through an agony of emotions and comings and goings until – at last! – he gets lucky. Ingenious. 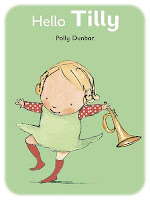 ‘Tilly and her friends all live together in a little yellow house…’
So begins each story in this series. I THINK it’s about the imaginary friends that spill out of Tilly’s picture book and play with her. There’s a delightful and eccentric cast list: a crocodile, a pig and a rabbit, an elephant in glasses and a hen in beads. I love the noisy words (of the ‘rooty-toot-toot’ kind), and the made-up words too. Who wouldn’t want to dance the ‘wiggly-woo’ with a plump little pig called Hector who wears red socks and a star-covered jumper?
Tilly has to take charge when the fun becomes ‘too much fun’. It reminds me of the care even the very smallest children take over their toys – bossing them about, sorting out their quarrels, tucking them up into bed… gentle Tilly is just the sort of character they will engage with. 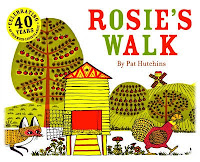 A vintage classic! Must be forty years old at least – but not everything over forty is past it, I hope??

This is the simple, nearly wordless tale of a jaunty hen out for a stroll, blissfully unaware of the hungry fox following her. It uses that most excellent narrative device, allowing the audience to be one step ahead of the main character and feel very clever about it too. The calamities that befall the poor old fox are satisfyingly slapstick. And the style which looked terribly dated twenty years ago now, oddly, looks chic and of the moment. 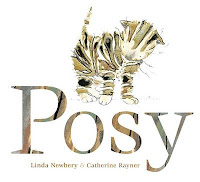 If you ARE going to have to read a book aloud over and over again, the text has to be very good or you’ll just expire of boredom. Linda Newbury has come up with a handful of words that you can really get your chops around with gusto.

The rhymes are clever and use a sprinkling of fairly sophisticated language. Quite right too. As long as it’s not mystifying or an obstruction, small ears can enjoy the sounds of words long before knowing their meaning.
I’m a big fan of Catherine Rayner’s illustrations. The scribbly lines and soft colours are really very dreamy indeed. In fact I recognised her at the basins in the toilet at The Edinburgh Book Festival and told her so; interesting conversations OFTEN take place in festival toilets I’ve found… 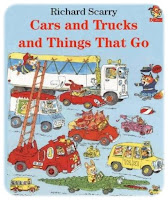 Cars and Trucks And Things That Go
Richard Scarry

Oh my goodness, the thousands of hours of joy this book holds in it’s pages! It doesn’t have much of a story (I must confess I didn’t usually bother reading it, actually), but it is jam-packed with hilarious, mad detail.
There are cheese cars for mice, corn-on-the-cob cars, hot-dog and donut-shaped vans, ants in pick-up trucks, walruses in military vehicles… Scarry hit on a good idea and ran with it brilliantly.

A book with one simple image on each page has it’s place, but a treasure chest packed full of little things to savour is really quite something. I well remember – when my two were small – the absolute thrill of the Argos catalogue… but couldn’t really have included that in my Fabulous Five, could I??

The Argos catalogue, or “funny number book” as my son called it as a toddler, was always a favourite of my children’s as well.
As for me, I have great memories of Richard Scarry’s books, particularly a story of banana theft in one of his books.
Thank you so much Clara, what a fabulous selection!