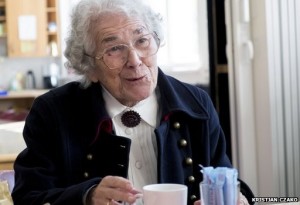 Last week, Twitter and undoubtedly the rest of the UK who were watching fell in love all over again with one of our most beloved children’s authors and illustrators, Judith Kerr.
Judith was the subject of an episode of BBC documentary series Imagine, Hitler, the Tiger and Me. I urge to watch it while it is still available.

Christmas is a perfect opportunity to introduce 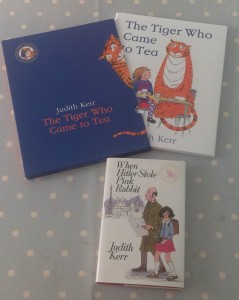 children young and slightly older to this wonderful writer, particularly as HarperCollins Children’s Books have released two beautiful hardback editions this year of The Tiger Who Came To Tea and When Hitler Stole Pink Rabbit to celebrate Judith Kerr’s 90th birthday.
Both these books are classics in their own right, and in their own way, and though I only discovered The Tiger Who Came to Tea as an adult, I vividly remember reading When Hitler Stole Pink Rabbit as a twelve year-old, and being the first one to borrow that pristine new book with such an unusual title from our school library (it was published in 1987 in France.

Every child’s home library should at least have one book by Judith Kerr, so now is your chance!

Source:
Tiger Who came to Tea received from publisher
When Hitler Stole Pink Rabbit own copy