The miracles of small things in Bob Graham’s illustrated world 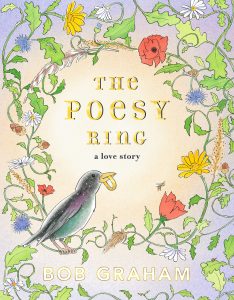 Bob Graham’s latest picturebook, The Poesy Ring: a love story (Walker Books) takes readers on a journey from 1830s Ireland  to 1960s New York, following the inadvertent voyage of a ring. It opens with with a woman riding away, with only the hint of her heartache mentioned in the text: “salt tears dried on the rider’s face”. A ship is leaving in the distance. The ring is abandoned, but after many years, begins to travel, with a bit of help: the hooves of a deer, the beak of a bird, the stomach of a fish .. until it finds a new owner. Though this might sound an unusual narrative for many, readers who have come across Bob Graham’s work before will not be one bit surprised by this. He is the master of creating narratives, often sparse in text, that focus on small things and how they not only impact us, but also connect us; across the centuries a broken heart is linked with two hearts full of love, with many others touched, sometimes unbeknown to them, by the glowing beacon of the ring, a sign of hope and love. It is delicate, brimful of small and significant details (time, for example is conveyed by the different ships which appear throughout), meditative and superbly accomplished. 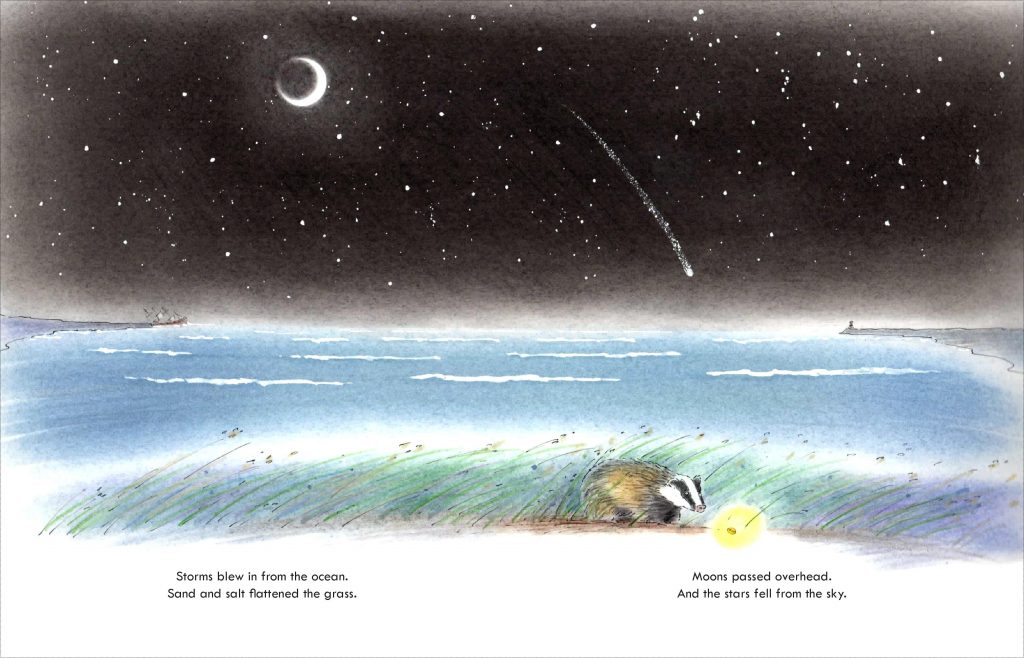 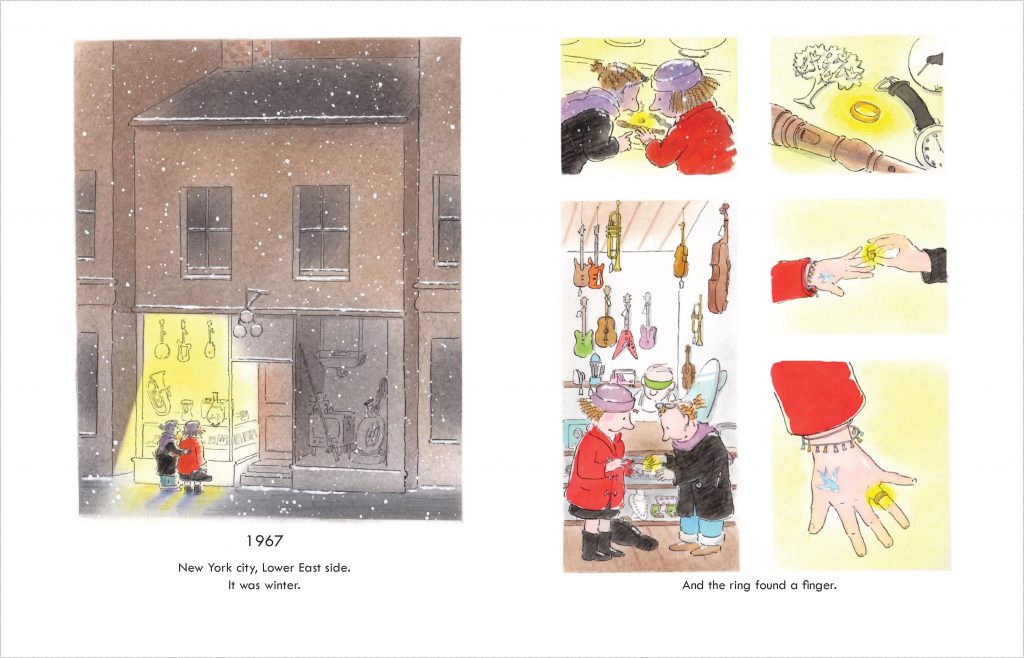 But why does Bob Graham choose to focus on such unusual, philosophical stories?

“I often walk a little line here in answering very specific questions on the origins of ideas etc as my natural inclination as the author is to sit back somewhere behind my books and let them tell their own stories” Bob replies after I was given the opportunity to send him a few questions about his work.  “Having spent some time putting the words and pictures carefully together best as I can I like to think of the readers bringing their own experiences to a story and reading it in their own ways. And I like to imagine that an adult and a child reading it together might also add to the story bringing things to it over and beyond what is written and drawn on the page. Hmm! that’s a nice thought for me and I hope it works like that sometimes.”

That is certainly my experience of his books; they encourage both contemplation and observation. This is conveyed particularly well thanks to how his narratives are constructed visually, throughout his body of work. Most of his picturebooks  are “graphic picture books” (a term used by Nathalie op de Beeck here),  with a very similar layout to comics and graphic novels, .  There are panels of different shapes and size, and they are often wordless. Some double-spreads have very complex structures, such as in How to Heal a Broken Wing, in which Will nurses a pigeon back to health: 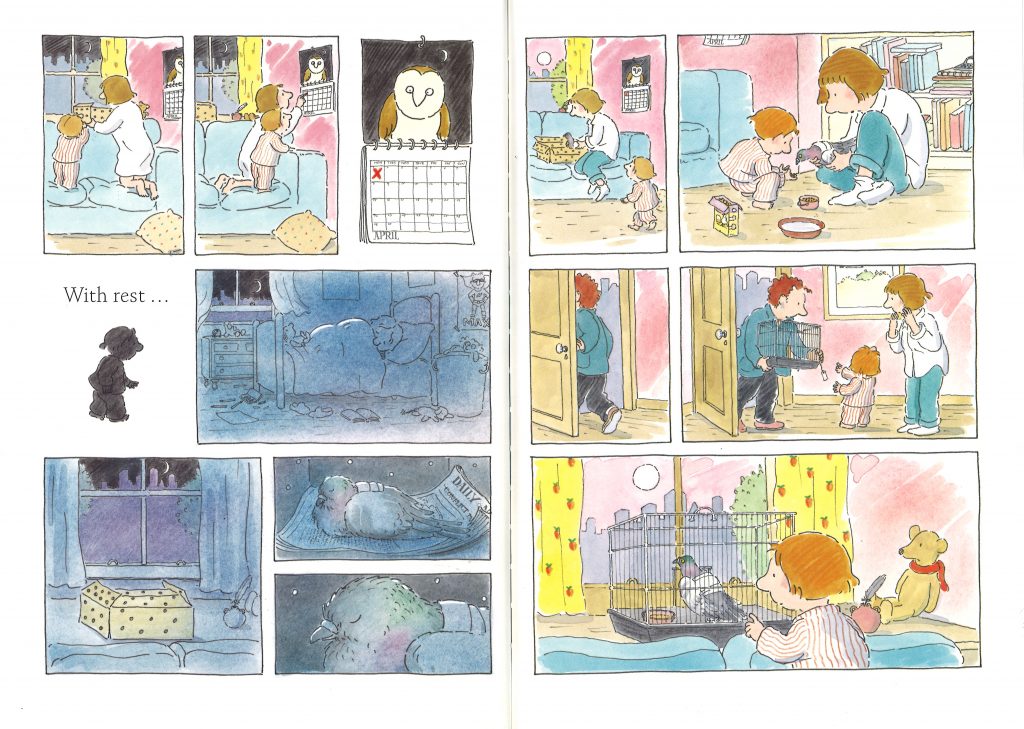 Sometimes, as is the case in The Poesy Ring, the panels have no frames, conveying a sense of open space around the action conveyed.
The wordless panel structures are often used to focus readers’ attention to small details and convey a meticulous, stop-motion exploration of an event, such as the acorn growing in The Poesy Ring: 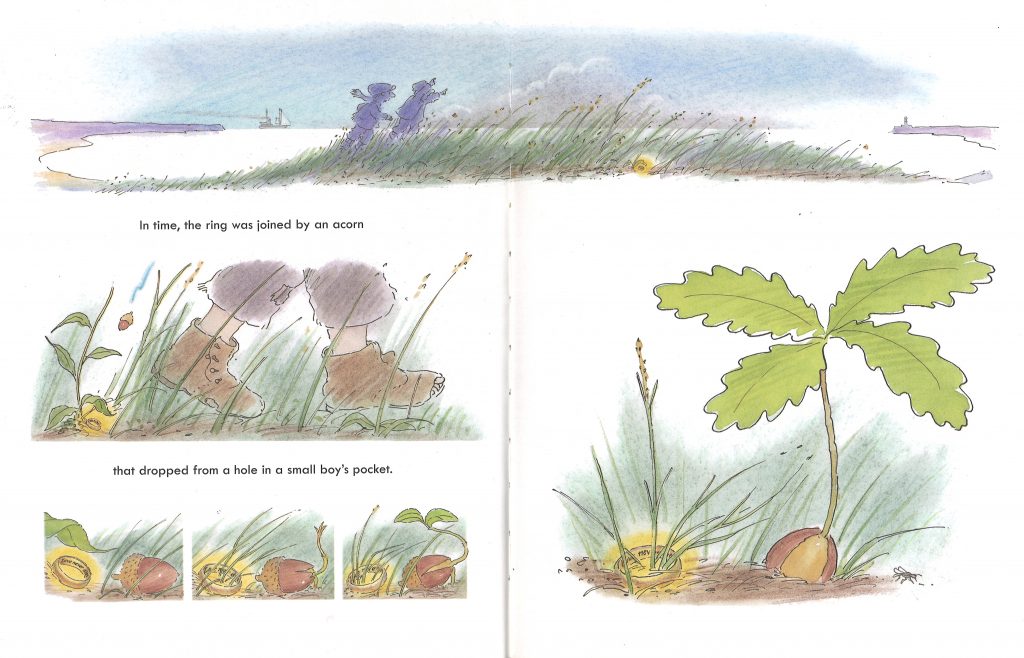 These intricate parts of the visual narratives would be so difficult to convey into words, especially within the word count limitations of picturebook texts. The panel structure is vital to supporting this, and also helps convey a sense of time passing, as with the acorn.  In How to Heal a Broken Wing, this is done by drawing the phases of the moon: 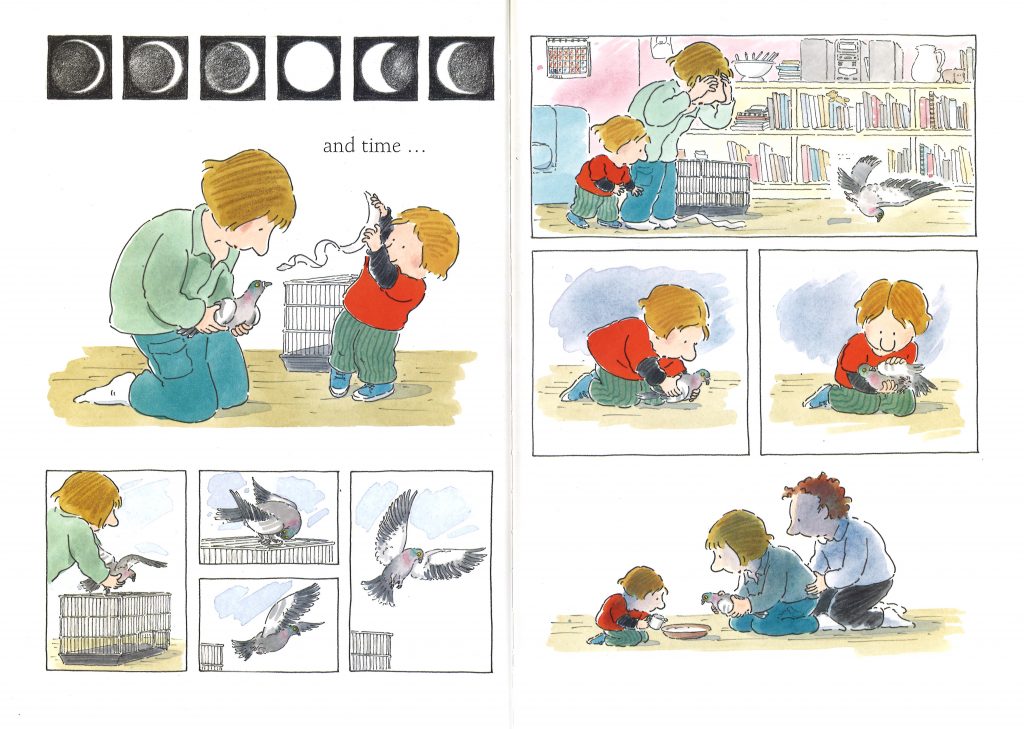 All this is balanced with with full bleed double spreads, allowing the reader to step back into the wider world after focusing on smaller things. For example in Vanilla Ice-Cream, which follows a sparrow hitching a ride with bags of rice from India to Australia,  the reader’s gaze is directed towards finding the sparrow on the boat through a sequences of panels, almost like a camera lens zooming in, and then in the next spread, zooming out completely again: 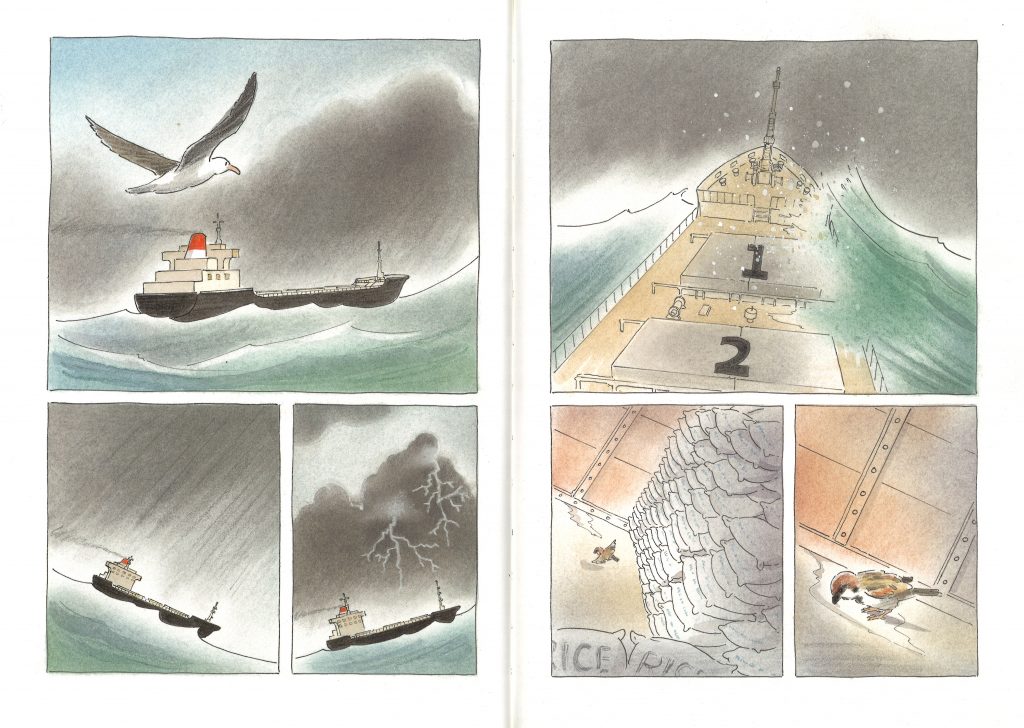 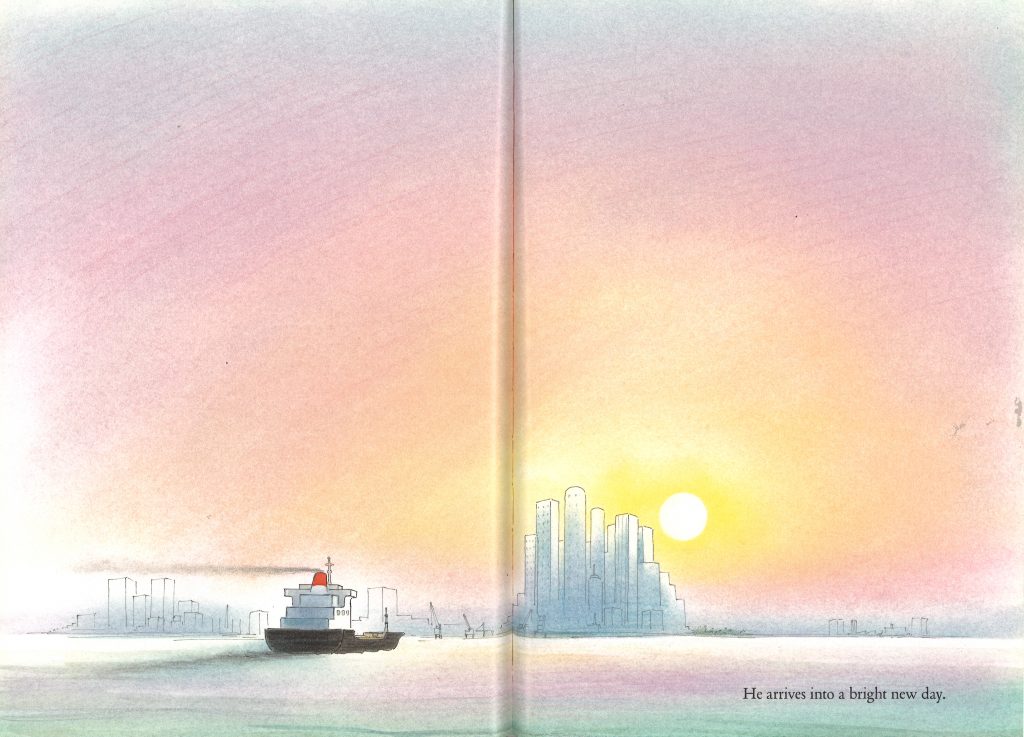 So does Bob plan his structure in advance? Is there a particular purpose for the paneled narratives, and how they look?

“Just how those stories come together, how they appear in the form of panels, double spreads, soft edges, text or no text, (sometimes I like to think of words and pics leapfrogging over each other,) is just down to the requirements of the story as it progresses on my drawing board” he replies. “And a mix of these things for me can be a kind of counterpoint to something very quiet going on in the story. I rely a lot on my intuition.”

Going back to the unusual, more contemplative themes of Graham’s books, they also often present a childlike perspective to everyday life; this is particularly striking I think in Silver Buttons and Home in the Rain. In terms of what adults might expect of picturebook narratives, nothing really ‘happens’ in Home in the Rain for example, yet it works as a story, focusing on how a child would see a long car journey. 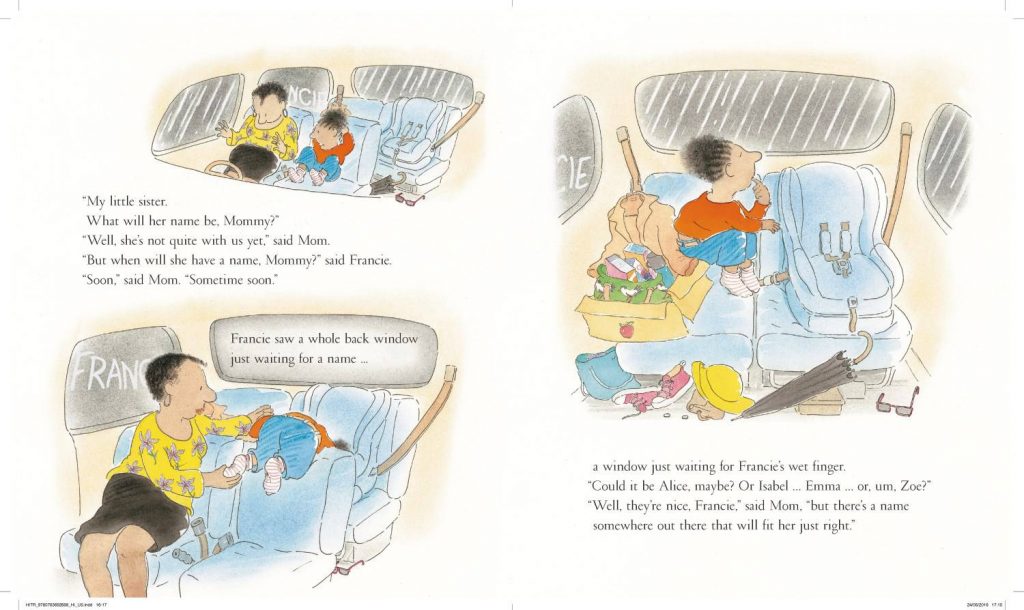 But does this matter to children, and have adults possibly lost the ability to see anything as an adventure? “I am 75 years old now and suspect that I see time in a whole different way to my very young readers,” Bob explains “but I think we may make a connection in that I see kids, ( very young ones at least) to have an ability to give themselves over and to be lost in The Moment. And if only we could carry that ability right into and through our lives… well, that is a worthwhile idea to try and put down on paper it seems to me.”
Those small moments of everyday life is what makes these books so unusual and comforting. The time frame of the narratives is also very specific of his work: the events in Silver Buttons happen over only one minute (the time it takes for Jonathan to take his first step), while Home in the Rain takes place over a single car journey. Sometimes these are longer time periods: a day long in How the Sun Came to Coco’s House, the time it takes the pigeon to heal  in How to Heal a Broken Wing, or across centuries in The Poesy Ring. Regardless of the length, there is a specific time frame and there is always closure: the ring is found, Jonathan takes a step, the day ends, the wing is healed, Francie and her mum arrive home.

I wanted to know whether these patterns in Bob’s work were deliberate or if this happened more intuitively:

“I have no particular formulas, approach a new book in any particular way beyond the feeling that I like my books to be quiet, maybe a kind of refuge zone from hyperbole. Whatever might be happening I like the feeling that the reader might have to do some work to bring their own thoughts to a situation- and that the “story,” or (“incident” even,) might be just a slice out of what has gone before the title page and will continue after the book is closed i.e. that all stories are just a point in time and part of a continuum. So I think that answers up to a point your questions re the time sequences in my various stories; that all stories take place over time be it a century or a minute.”

These tiny details in our lives that Bob Graham so uniquely and lyrically  illustrates, those that we might not really notice as we go on in our everyday routines, are also those that often, unbeknown to us, connect us, as mentioned earlier with the ring in The Poesy Ring, but also the bird in Vanilla Ice-Cream, the sun in How the Sun Came to Coco’s House to name a few. This allows for effortless diversity, not only in the characters but also in the homes they live in and their surroundings. 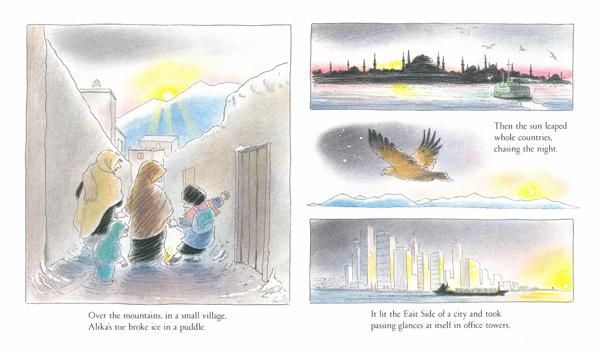 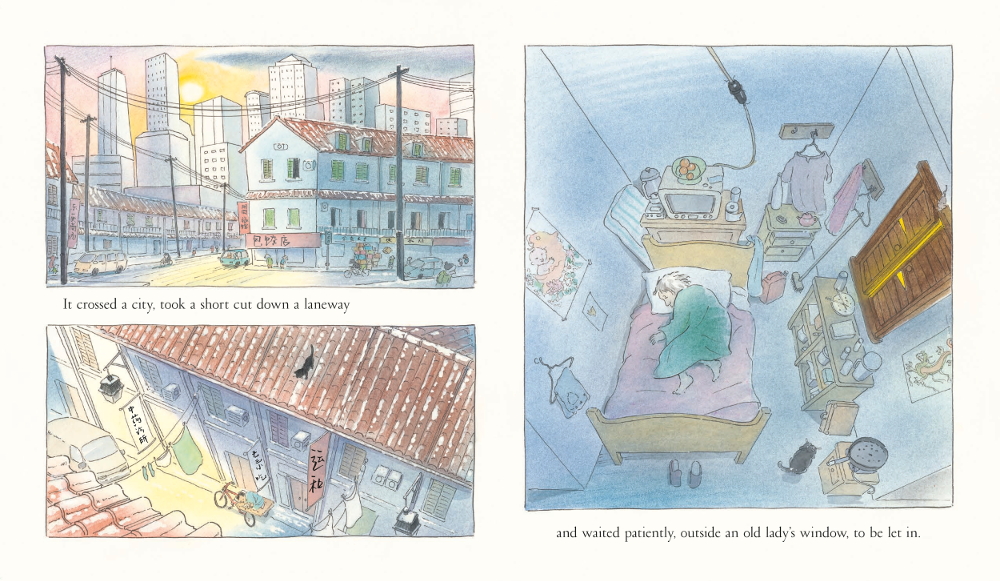 These connections go much further than I had anticipated at first. It wasn’t until several readings that I realised that there was a picture of Jodie and Jonathan from Silver Buttons on the wall in Coco’s room in How the Sun Got Coco’s Room. It made me wonder about other links between the characters that I might have missed. 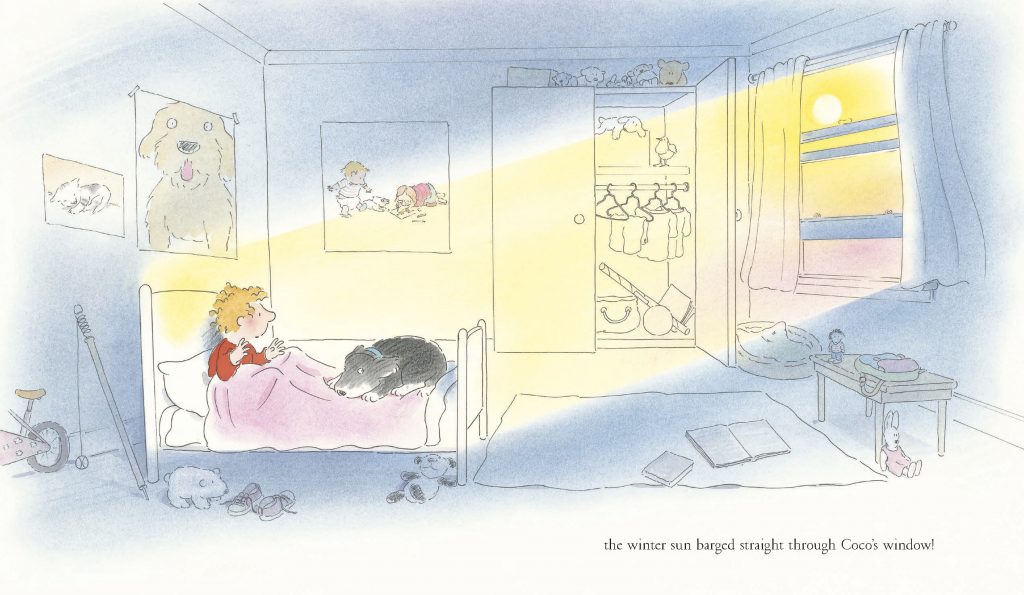 ” Yes I like to think there is a link between all my characters;” Bob adds as a Post Scriptum to his email “that maybe they all live just around the corner from each other and the mum in Silver Buttons might call around to Captain Lightning and Madam Thunderbolt’s house to borrow a cup of sugar.”

What an absolutely wonderful thought, that somewhere there is a town with all of Bob Graham’s characters living alongside each other. Thank you so much for creating such a beautiful, safe and kind-hearted world, Bob. I am off to fetch my passport.

Bob Graham’s books are published by Walker Books in the UK.

The Poesy Ring was kindly sent to me for review by the publisher.