IT’S NATIONAL NON-FICTION DAY!!!
The day has finally come and I felt very honoured to intereview the amazing Philip Ardagh for this very special occasion!﻿

You have written both fiction and non-fiction books abundantly. How different are the experiences of writing? Which is the more fun?
All writing is about communicating ideas — whether factual or fanciful — and most stories are centred around characters. When I’m writing fiction, the characters may be the inhabitants of Grubtown in my Grubtown Tales or the strange assortment of Victorian oddities Eddie Dickens encounters in his adventures which began in Awful End. When I’m writing non-fiction, the characters who people my books maybe the scientists who made great discoveries or, in the case of Henry’s House, they may be bugs, skeletons or even germs themselves!

What I love about writing fiction is the freedom to do pretty much anything. What I love about writing non-fiction is working within the constraints, but opening things out and making the subject matter not just accessible but also inviting. Anyone can explain the basics of Einstein’s Theory of Relativity in ten pages. My challenge is to do it in a few pages in an interesting and fun way that a child as well as an adult can understand. Then there’s the research, of course. That’s a great part of the process too, because it’s the little extra things one stumbles upon along the way that might throw a slightly different light or a new perspective onto something.


Which is more fun? I can’t compare them. I bring my writing skills/tricks/techniques to both and enjoy them both in similar and in different ways.

“Henry’s House” is a series for younger readers, where an ordinary little boy lives in a rather extraordinary house. How did the series come about? 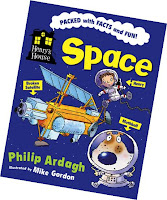 Scholastic, the publisher, were keen to come up with a series which could cover everything from animals to volcanoes, and were also keen to work with me. (They have excellent taste.)


A whole group of us got together in a room full of tea, coffee and chocolate biscuits, and we bounced ideas around. We wanted a framework in which we could comfortably set both a book about dinosaurs and, say, one about the Romans. We covered a lot of ground — and ate a lot of high quality biscuits — that day and threw out a lot of what wouldn’t work.


When my original website was being set up, one of the ideas was to make it like a house with lots of different rooms covering different series and aspects of my work, so I was beginning to think along those lines. It was after the meeting that Lisa Edwards and her team distilled what we’d discussed and actually came up with the name Henry’s House.


It was one of those occasions where everything fell into place. Once we had the series title, I immediately wrote two phrases on a scrap of paper: “Meet Henry, an ordinary boy in an extraordinary house” and “Fact-packed, fun-packed, get packed… and head for Henry’s House.” These seemed to encapsulate what the whole series was about, and those hastily scribbled words survived throughout the initial stages of the project, even making it onto the back cover of the books.


The characters also pushed to the fore: as well as the boy Henry himself, it was obvious that he’d have a dog (Mothball) and a cat (Fishcake) and that the house would have a caretaker (Jaggers) who’s never phased by the weird and wonderful goings-on. Add to the mix Hank the Handyman (who loves to dress up) and you have the main cast, with a B-list of the odd scientist and explorer who might turn up in the books now and again, plus characters who only appear in one particular title.

Another character is, of course, the house itself. One minute, the staircase is a staircase, the next minute it might turn into a waterfall for Henry to float down in his ancient Egyptian papyrus boat. A wardrobe door might open to reveal a giant creepy-crawly or, on another occasion, onto a winding staircase leading to a castle turret.

When writing a Henry’s House book, I have to roughly design each page too, working out what needs to appear where, and exactly where speech bubbles will have to go on the page to be sure that people read them in the right order. These sketches then go to my editor, Jill Sawyer, and we discuss them and refine them before they land on the desk of a genuine designer, and go on to Mike Gordon for illustrating.


What inspired you to write “Philip Ardagh’s book of absolutely useless lists for absolutely every day of the year” (an amazing book title by the way!)?

Thank you! Gaby Morgan, my editor at Macmillan, and I have worked on numerous non-fiction titles together so she’s fully aware of the amount of useless information I’ve amassed over the years. She suggested a book with a list for every day of the year. I should have simply agreed and left it at that. Instead, I went and made it 100 times more complicated by deciding that I wanted to choose a particular event relating to each and every day, and then to come up with a connection — sometimes outrageously tenuous — between it and my list for that day. The amount of research and fact-checking was phenomenal… but I was very pleased with the end result. As a follow-up I did Philip Ardagh’s Book of Blunders, Howlers & Random Mistakery and I’m working on a third at the moment!

People often complain that ‘boys aren’t reading’ when what they really mean is that (some) boys aren’t reading novels. They’re getting information from books, magazines, manuals and off the internet but somehow it doesn’t occur to such folk that this is reading but in a different form. Some of the most borrowed books in libraries are biographies and autobiographies. Does it bother me? It niggles, but the most important thing is to make books of all kind accessible, interesting and stimulating.


Which subject that you have not written about yet would you enjoy tackling?


When you read non-fiction for pleasure, which subjects do you particularly enjoy reading about?

History, whether it be about events or ideas or inventions or discoveries, or architecture of language. Anything that has people at its heart. I’m interested in science and the arts but, as I said in answer to your very first question, from a people perspective. What is as interesting to me as the science itself of, say, the atom is how such conjecture and discoveries surrounding it were made.


Thank you, Philip. It has been an absolute honour to have the opportunity to ask you those questions and a great pleasure to read your answers!

Thank you. And a very happy Non-Fiction Day to you and all your readers.

Special thanks to Catherine at Scholastic for being such a star! 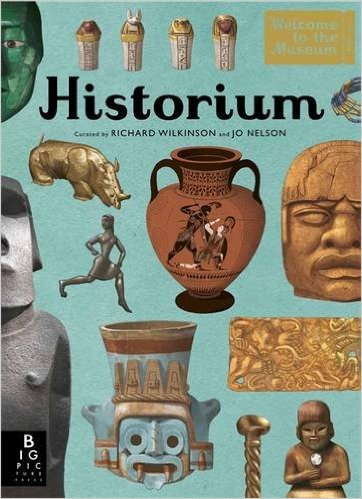