Marshall Armstrong is New to Our School 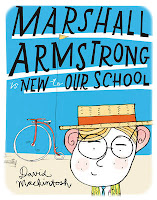 When Marshall Armstrong joins the school of our young narrator, it becomes clear fairly quickly that he is different. In fact, everything about him is slightly odd; Marshall is obviously rich, a little bit eccentric and prone to all sorts of medical issues. He is rather unique, but he just does not fit in. But, not to be defeated, he decides to  invite the whole class to his birthday party. Our little narrator is more than a little reluctant to go at first, but once he is there, he realises that he might have been a little bit mistaken about Marshall.

Marshall Armstrong is New to Our School takes the familiar and fairly common children’s book theme of being different and trying to fit in and takes it to a new level thanks to the unusual storyline and the very distinctive artistic style of the illustrator.The artwork is incredibly stylish but fun and child-friendly, with beautiful retro colours and overall vintage feel (particularly I felt in the double spread showing all the things the children get up to at Marshall’s house).  The illustrator’s quirky style, which is a mix of cartoon-like pencil drawing, collage and more elaborated drawings,  allows to create a particularly unique central character: Marshall is as kooky as it gets, with his typical English private school outfit (going into what very much looks like a state school!) and his penny farthing. There is a slight naivety to the drawings which mirrors well the naivety of the young narrator. Very busy double-spreads follow very sparse ones, which again mirrors the little narrator’s mood.
The humour and wit in the text will be much enjoyed by young readers but won’t be lost on adult readers either, for example the joke regarding his glasses, which, according to the narrator, Marshall has obviously stolen from another boy .. they are Ray Ban sunglasses! 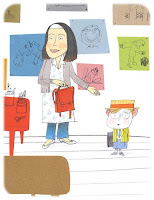 Marshall Armstrong is New to Our School offers an interesting take on being accepting of others’ differences. The viewpoint of the story is from the reluctant pupil who has to suffer the newbie sitting next to him in class, and  little readers will witness the narrator slowly learning to accept Marshall as he is, quirkiness and all. It is a great book for children who might be worried about not fitting into a new class (especially if coming half-way through the year as Marshall obviously does). But one cannot help but wonder why the narrator finally accepts Marshall as a friend. Is it because he has seen Marshall in a new light or is it because (my cynical self whispers to me) he has seen how cool Marshall’s house and stuff are and that has hindered his judgement somehow? One hopes young audiences will focus on the very positive message of not judging a book by its cover.

Marshall Armstrong is New to Our School is the sort of unusual picture book  which will delight grown-up admirers of illustration and design, but with great artwork and a funny yet touching story it will enchant younger audiences just as much.

Thank you to the lovely people who were manning the Harper Collins stand at the FCBG conference who gave me a hardback copy of  “Marshall Armstrong is New to Our School”.