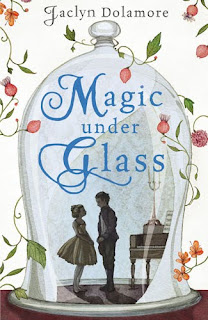 Nimira left her native Tiansher after her mother, a dancer in the Royal Court, died and travelled to make her fortune as a dancer herself. But at the beginning of the book, we find her performing as a music-hall dancer, a “trouser girl”, forced to dance for drunken audiences in a squalid hall of Lorinar. That is until that very night, when a gentleman – who turns out to be the sorcerer Hollin Parry- notices her and comes to her at the end of the show with a proposition: he wants to employ her to sing as accompaniment to his piano-playing automaton. Nimira accepts and is soon taken to Hollin’s estate, where she meets her kind maid Linza and the very scary governess Miss Rachten, but most importantly the automaton. The rumour goes that it is haunted but Nim soon discovers that a fairy gentleman, Erris, is in fact imprisoned inside. They soon fall for each other and Nim vows to set him free; this is of course not doable without obstacles, many of them involving the dark and threatening Smollings, head of the Sorcerer’s Council.

Although I felt the writing lacked substance at certain points, I did like the gothic feel of the story. I can even forgive Dolamore for shamelessly borrowing Charlotte Brontë’s Mad Woman in the Attic idea (although this one thankfully does not meet a sticky end!). I liked the points that Dolamore made about race and diversity (Smollings is shamelessly racist and sexist) as well as some pertinent comments on war and intolerance. But where it let me down was in the feelings. Nim is nice, but not a heroine that I could empathise with. And her and Erris’ relationship is very sweet, but there was not much passion there, nothing to be bowled over by. To me this indicates that this is probably one for the younger side of the target audience.


The ending is left wide-open; I think it still works well as a stand-alone, leaving the story on a note of hope and optimism, but with the current obsession with sequels and series, I would not be surprised if one is in the pipeline here.

An enjoyable read, but one that is most suited and will undoubtedly delight the younger end of the teen readership.