Madame Pamplemousse and the Time-Travelling Café 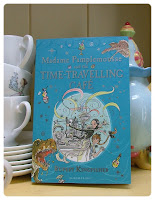 The city of Paris and its treasures (its architecture, shops, cafés and anything remotely old or cultural) are under threat; a new government, with a modernising, terrorising and dictatorial President at its head, is planning to destroy the city and make its inhabitants miserable. Everything remotely pleasant has to disapear, and the President particularly has his eyes on The Most Incredible Edible Ever Tasted, which can only be found in a little shop owned by Madame Pamplemousse and her cat Camembert. But as Madame Pamplemousse is nowhere to be found, he sends his nasty assistant, the superbly named Mademoiselle Fondue, to interrogate Madame’s closest ally: Madeleine, a little girl who was previously rescued by Madame Pamplemousse and who has since been adopted by the owners of The Hungry Snail restaurant, Monsieur and Madame Cornichon. Madeleine, sensing danger, is forced to flee, and she is tipped by her friend and her furry sidekick to go to a side-street little café, The Café of Lost Time. There she meets the owner Monsieur Moutarde, who soon instructs her that the café in fact hosts a time-travelling machine disguised as a coffee machine. And so begins a time-travelling adventure taking them on a quest for the ingredients, which include the droll of a T-Rex and the venom of the Loch Ness Monster, needed for a special potion that will help Paris and its inhabitants fight back.

I loved the first book in the series, Madame Pamplemousse and Her Incredible Edibles, so I was chuffed to hear there had been a sequel, and it has just been published in paperback. This series stands out from many of the other books for this age-range. Its packaging for a start, particularly in the hardback versions, is stunning (there are lovely illustrations throughout by Sue Hellard) and will undoubtedly attract the eye of parents who like quirky and vintage looking stuff (I am shamelessly pleading guilty here). But underneath the prettiness, you will find a remarkably original, magical and hugely entertaining little series. I love Rupert Kingfisher’s descriptions of Paris; there is a lovely nostalgic atmosphere, à la Amélie (the film, that is). All characters have French food names (some of them really comical, but I guess being French, I would find someone called Monsieur Cornichon more hilarious than most!) and food is central to the stories. I wonder whether Rupert Kingfisher‘s secret ambition was to be a chef, or maybe French? Anyhow, the story is original, fantastical, magical and lyrical. One might be concerned that some of the language might be a bit too sophisticated for the target audience, but I think it is part of the appeal of the series, it is not dumbed down like many others published these days. Beyond the wackiness of the story, there is also a bit of statement about today’s society: over-consumerism, soulless architecture, over-the-top surveillance and the supremacy of the media all come under attack, with the heroes preferring a simpler way of life (again you can feel some nostalgia for an “old” Paris here). But this first and foremost remains a deliriously fun adventure using many traditional storytelling ingredients but nonetheless fresh and modern.


This has huge adult appeal too so let yourselves be tempted, it’s a real treat.


The third instalment, Madame Pamplemousse and the Enchanted Sweet Shop, is out next month.