Before We Say Goodbye 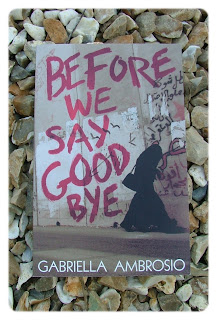 “This is no life. Sooner or later it must finish.”

One spring morning in 2002, in Jerusalem. As the city awakes, two teenage girls are already on the go. Myriam, a Jewish girl, is off on the hill, walking off the sorrow of losing her best friend Michael in a suicide bomb in a bus. Dima, a Palestinian girl, is on her way to school. She is a brilliant student and betrothed to her cousin Farid. She knows she should be happy but she cannot find it in her heart to forget and forgive the ordeal and horrors of living in the curfew area. Other characters come to join into this hour-by-hour account of a day that will bring two very different girls together in the most distressing way.

This story of two girls from opposing sides who are mistaken for sisters is based on a true story of a suicide bombing in Jerusalem in 2002.

What this book has been unanimously hailed for is its ability to tell such a story without taking sides, without judging. The Palestinian issue is one that many people have strong views about, including myself. But Ambrosio manages to tell a tale so lacking in emotional and political bias that you find your beliefs rattled while reading it. Telling such a tale in such an objective way can have a profound effect on the reader: for the biased adult, like me, this might bring a newfound empathy for the “other side”, a new light to help see a situation that one assumes can only be one-sided. For the younger audience, who might, hopefully, still be approached as a blank canvas, a book like this can bring so much understanding about the nature of conflict, about things never being simply “right or wrong” or “black and white”, and about opening their eyes as to who really suffers in conflicts. I can only applaud Ambrosio’s skill at approaching this subject and I assume her journalistic background has undoubtedly helped her to remain so level-headed.

This is by no means an easy read; it’s not particularly graphic and violent, but extremely emotionally charged. I was particularly moved by the parallels drawn between the two girls. Dima’s deepening despair is mirrored by Myriam’s slow emergence from hers. While Dima loses all hope, leading her to the ultimate sacrifice, Myriam is finally seeing a glimmer of what her future could be in her homeland. This makes the ending all the more heart wrenching.