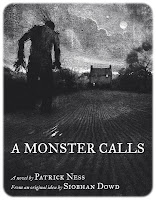 Patrick Ness
from an original idea by Siobhan Dowd, with illustrations by Jim Kay
(Walker Books)

Connor has been having nightmares for a while. But one night, a monster, which seems to have been born from the yew tree in the churchyard opposite their house, comes to him at 12.07 am exactly and continues to do so every night. At first Connor thinks he is trying to scare him but the monster insists he is here to help him and that it is he, Connor, who has in fact summoned him. The Monster wants to tell Connor three stories, and the fourth story must be told by Connor, and must be his truth, how he really feels. As the Monster and Connor’s relationship develops, Connor’s story starts to unravel and the purpose of the Monster’s visit slowly becomes clearer.

I don’t think anything that I will say about this book will do it one ounce of justice. This is beautiful story, touching, sometimes funny, often harrowing to a point that is almost unbearable. Based on an original idea from the much-missed Siobhan Dowd, Patrick Ness tells the tale of Connor, a young lad who lives alone with his terminally ill mother. His father lives in America with a needy new wife, his grandmother seems distant and uninterested and he has more foes than friends at school. I think it is fair to say that Connor is “living” his mother’s cancer as much as she is and through the text, so are the readers. But all is done is such a subtle, lyrical way that it is not only more effective but all the more harrowing.
The Monster is a wonderful creation; part- yew tree and part-monster, it is fearsome in appearance, destructive and grumpy in temperament. But it also represents life, death and rebirth as is so beautifully illustrated in the three allegorical tales it shares with Connor and the readers. Each of the three stories has a moral and the overall message is that life is not always fair or kind , and that one needs to learn to deal  with that. The Monster’s purpose is to help Connor deal with the many difficult issues in his life: the bullying, the loneliness, the pain, the guilt. The latter is the most heartbreaking, the most painfully real, the most buried feeling for Connor, and through his suffering and his journey towards acceptance, young readers are presented with an important lesson: thinking something terrible does not make you a bad person. Although the Monster dishes out some tough love throughout the book, the reader slowly realises its purpose is to make Connor accept this, and consequently you cannot help but like the creature.

The ending of the story is not unexpected of course but is done  in a way that will not leave any reader unshaken; it is simply immensily sad. One cannot help but wonder how Siobhan Dowd might have been feeling when she put this idea to paper, as she was possibly contemplating, ultimately, her own demise. This makes the experience of reading A Monster Calls all the more poignant.

Taking on someone else’s idea cannot be easy when you are a writer, and one must applaud Patrick Ness not only for having the guts to do it, but for doing such a formidable job of it. I love both Patrick Ness and Siobhan Dowd’s books and was very excited at the prospect of this book, but also felt a bit concerned, as both authors’ styles differ so much. But it worked so wonderfully, because Ness did not try to echo Dowd’s style but rather did her idea justice in his own. His writing is direct and harsh, but filled of empathy and emotion. He has such a unique voice; there is just nobody else that can write like Patrick Ness.

The book is heavily illustrated by Jim Kay and the artwork works perfectly with the text, bringing the sinister, harrowing atmosphere of the story to life. Walker have surpassed themselves, again, on the book design; it is a beautiful book,which really stands out. 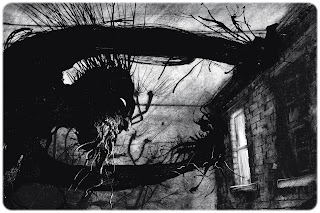 Patrick Ness has taken Siobhan Dowd’s original idea and with it has created a beautiful, emotional and moving novel which will stay with its readers long after they have turned the last page.
Go read this book.

Many thanks to Walker Books for sending me a copy of “A Monster Calls”.