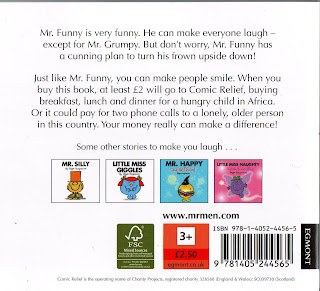 Today I took my children to Waterstone’s for a treat (well actually a bribe as my son only agreed to go to cinema to see Bolt if we went to the bookshop as well!) . I noticed the new Mr Men, published for Red Nose Day, and threw it in with the rest, not paying much attention to it. It’s only once we were sitting having lunch and admiring our purchases that I saw IT. I couldn’t believe it. They have put an age-band on a Mr Men book! Seriously. Now I am not going to start the whole “for or against age-bands” debate again, although I very much belong to the Pullman team, but let’s say, for argument’s sake, that age-banding is useful for people who don’t know much about children’s books. Who could be in any doubt as to who Mr Men books are suitable for (everybody, in my honest opinion)? Does it really need a 3+ on the back? Really?
Anyway, I am sure everybody sitting in the M&S café where we were having lunch is now aware of my opinion on the matter. Thankfully, out of all the books we bought, this was the only one with an age-band. And the new Emily Gravett, which was among our purchases, is fantastic. And Bolt was great, much better than Wall-e. So it wasn’t that bad a day really.