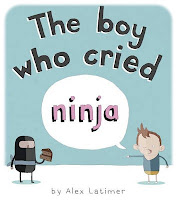 Alex Latimer is an author and illustrator living in Cape Town, South Africa, which is why he regularly has to shoo baboons out of his lounge. Alex used to write a comic, The Western Nostril with his brother Patrick, and according to his blog, he has also achiived some pretty wacky stuff such as boiling a tiger, getting tick-bite fever three times and done some cartwheels on the lawns outside Buckingham Palace!
The Boy Who Cried Ninja is his first book for children.

Check out Alex’s website and blog for more information

I grew up with these picture books – interspersed with Dr Seuss and Richard Scarry books of course – but these five were the really memorable ones. Strangely, when I look back at them, it’s hardly ever the stories that caught my imagination – it was always the illustrations. Strange, because when I set about writing my first children’s book, I had written a decent story even before I had the skills to draw it. The script lay dormant while I tried to emulate the skills of these illustrators that influenced me as a child. 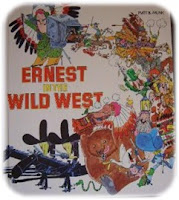 Ernest in the Wild West
Ermanno Libenzi and Adelchi Galloni
I’m not sure I ever actually read this story, but I remember the size of the book. Much bigger than the rest of the books on the shelf, and each double page spread filled to overflowing with cowboys and indians and ferry boats and men with huge hands and horses that smoked cigarettes. This is glorious eye-candy for every age – and to its credit it didn’t sanitise the reality of the Wild West – there are dancing girls and slaves and lots and lots of shooting.

Professor Noah’s Spaceship
Brian Wildsmith
Only now, reading the reviews of this book on the Internet do I realise that it had a ‘message’. Something along the lines of ‘save the environment’ with a dash of Christianity thrown in. But again, it was the pictures that had me hooked. Page layout and design are two things that Wildsmith do exceptionally well – creating a book that is striking and enchanting. The elephant in the space suit is a fantastic spread – the kind I’d like framed on my wall. 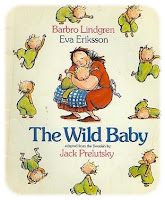 The Wild Baby
Barbro Lindgren and Eva Eriksson
The Wild Baby has such a lovely premise. A baby so wild that he has his mother running after him on each page, trying to save him from injury. And no matter how wild the baby gets, the unconditional love of his traumatised mother is ever present. All that comes through the charming illustrations – just look at that picture of the mother hugging her wild baby on the cover. It says it all.

What-a-Mess
Frank Muir and Joseph Wright
What-a-Mess became a series of books. But it was the first book that I owned and it was that one that I fell in love with. This was one of the fore runners of the heap of modern books about snot and mud and all things gross. I loved the detail of the fish bones and apple cores that would cling to What-a-Mess’ hair and just the general messiness of the illustrations. 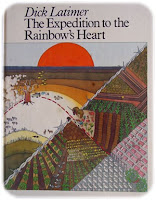 The Expedition to the Rainbow’s Heart
Dick Latimer

This will seem like bias – but as long as I’m making this list, I must include the book that my father wrote and illustrated. You won’t have heard of it, and you can’t find it online – so you’ll just have to take my word about it. My father wrote this book in 1982, when he was still working as an architect – and it shows. The illustrations are wonderfully patterned and detailed and fantastically laid out. The story is a bit lumpy in parts – about a bird who enlists the help of two men to help a massive hive of bees, whose flowers have been chopped and sold to the city folk. Most of all, it was this book that helped me realise that I could write and illustrate books too. (I do still own a copy of this, but I’d love a second one.)

Thank you so much to Alex for taking the time to write this wonderful post. It is always so interesting to find out what inspires  illustrators’ work.
Thank you also to Kelly at RHCB.